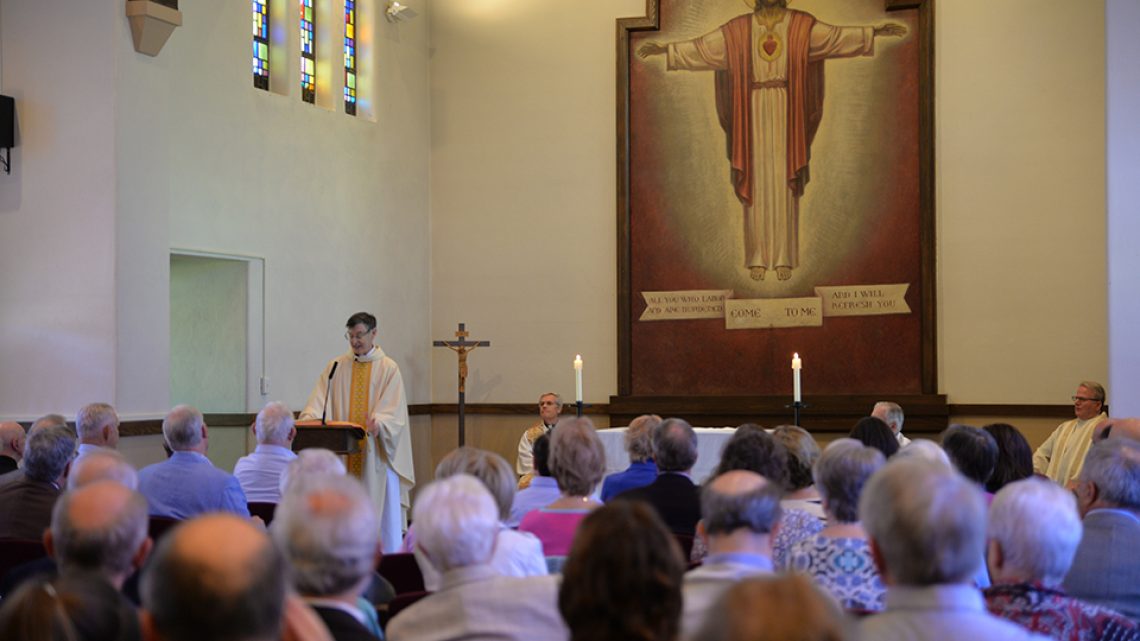 Below is the homily I delivered from the 90th anniversary celebration Mass on April 29, 2018. Also there is a short slide show of pictures from the event.

When I entered the Jesuits here at Sacred Heart Novitiate in August of 1963, after having smoked my last Lucky Strike for many years, little did I know that I was entering a sacred space with an interesting history that I would not return to for fifty years until this last July of 2017. I have come full circle and what a blessing it has been!

In 1896 William T. Irwin built the Rock House on 88 acres of property known as the “Ripples” due to the flow of the Little Miami River over the Rocks below the house. The Irwin family was not Catholic but had a love and care for the Catholics of the area. For example, they had Masses said after one of their daughters died; and they moved the time of their meals so that a cook could attend Sunday Mass.

In 1925 the Jesuits purchased the 88 acres of property for $94,000 to construct a novitiate that was completed in 1927. A Jesuit novitiate and Juniorate was the early formation program for future Jesuit priests and brothers. Retreats in Cincinnati began at Elet Hall of Xavier University around this time and quickly moved to the Rock House and Barracks at Milford. This retreat ministry grew rapidly and led to the opening of Men of Milford in 1950, which is the current Arrupe Building that you are in. This building has been constantly renovated and the Pilarcyk wing added on since then. Around 1968 the barracks were demolished and the new Loyola Building was constructed mainly for youth retreats and in the 1970’s to house the internationally known spiritual direction-training program at the Jesuit Renewal Center. At the turn of the 21st century the Pavilion was thoroughly remodeled for day programs and the Thomas House and Splain cabin added along with the old train station becoming the Willig Chapel. In 1969 the novitiate closed and 55 acres were sold to Southeastern Ecumenical Ministries for senior housing. The Jesuits retained 33 acres for the Jesuit cemetery plus the grounds for the Jesuit Spiritual Center.

Today the Jesuit Spiritual Center to the best of my knowledge is the only Jesuit Retreat House to have its own youth ministry team consisting of three professional full time ministers and four live-in young adult interns. The world-class youth ministry program at JSC serves almost 8000 young people per year. Besides that, JSC has a robust privately directed retreat program, an annual thirty-day retreat, and adult conference retreats for both men and women along with offering this sacred space for ecumenical groups to use for their retreats and day programs. In the near future we hope to re-institute spiritual direction training here at Milford.

The Jesuit Spiritual Center Board of Trustees recently approved 3 Core Values that inspire and direct our entire ministry here. Silence is critical to stepping back from the noise of our world to hear God whispering in our experience; the Awareness Examen is a daily exercise to become conscious of what gives us joy and energy so we can be grateful, and what sucks us dry and brings desolation so we can be healed. Finally, discernment is an Ignatian tool from the Spiritual Exercises that helps us make decisions freely according to the standards of Jesus.

The Jesuit Spiritual Center is a sacred space and ministry of the Midwest Province of the Society of Jesus where the Spirit can come to our Church and world in diverse and creative ways. This ministry is built on the foundation of giants—many Jesuits, other religious and diocese priests and bishops, lay men and woman have come from all over the world to help us transform society.

In our world today, we all know the need for a deep spirituality that will anchor us against the noise of partisanship, human rights violations, and help us to respond to the needs of the poor and care for our environment as well as guide us in our daily lives as people committed to faith and justice.

This ministry at JSC seeks to unite us to the true vine so that we can bear fruit in our world. This spirituality prunes us through the process of the Spiritual Exercises of St. Ignatius of Loyola, the Founder of the Jesuits, so that we can be free enough to bear even more fruit today for our Church and world. We certainly do need silence to hear God’s voice today more than ever along with tools such as the Ignatian Awareness Examen and methods to sift through (discern) what is from the Holy Spirit and what is not of the spirit today. With these tools of the Discernment and our own faith communities, through God’s grace we will bear much fruit, and a fruit that will last—that is the call from John 15 that we heard in the Gospel this afternoon.

On this 90th anniversary Eucharist for the Jesuit Spiritual Center at Milford, let us give thanks for this ministry, the Jesuit sponsorship over these 90 years, the staff (past and present), our benefactors living and dead, and for the many retreatants who have graced this land known as the “Ripples.” Let us pray that this ministry continue to grow for the next 90 years and beyond. Thanks for coming today and may God bless you.

Fr. Paul Macke, SJ currently is the Jesuit Mission Coordinator at the Jesuit Spiritual Center at Milford. Previously, he served 5 years as Executive Director of Bellarmine Jesuit Retreat House just outside Chicago. He is well-experienced in retreat ministry, having served in pastoral ministry in Alaska for 17 years, including six years as Executive Director of Holy Spirit Retreat Center in Anchorage. Following his years in Alaska, he was appointed Secretary for Pastoral Ministries and Jesuit Life for the Jesuit Conference of the United States in Washington, DC. In that role, he worked to promote the ministry of the Spiritual Exercises in the 28 retreat houses and 100 parishes of the Society of Jesus in the U.S. He holds an MA in counseling and D.Min. in pastoral psychotherapy.