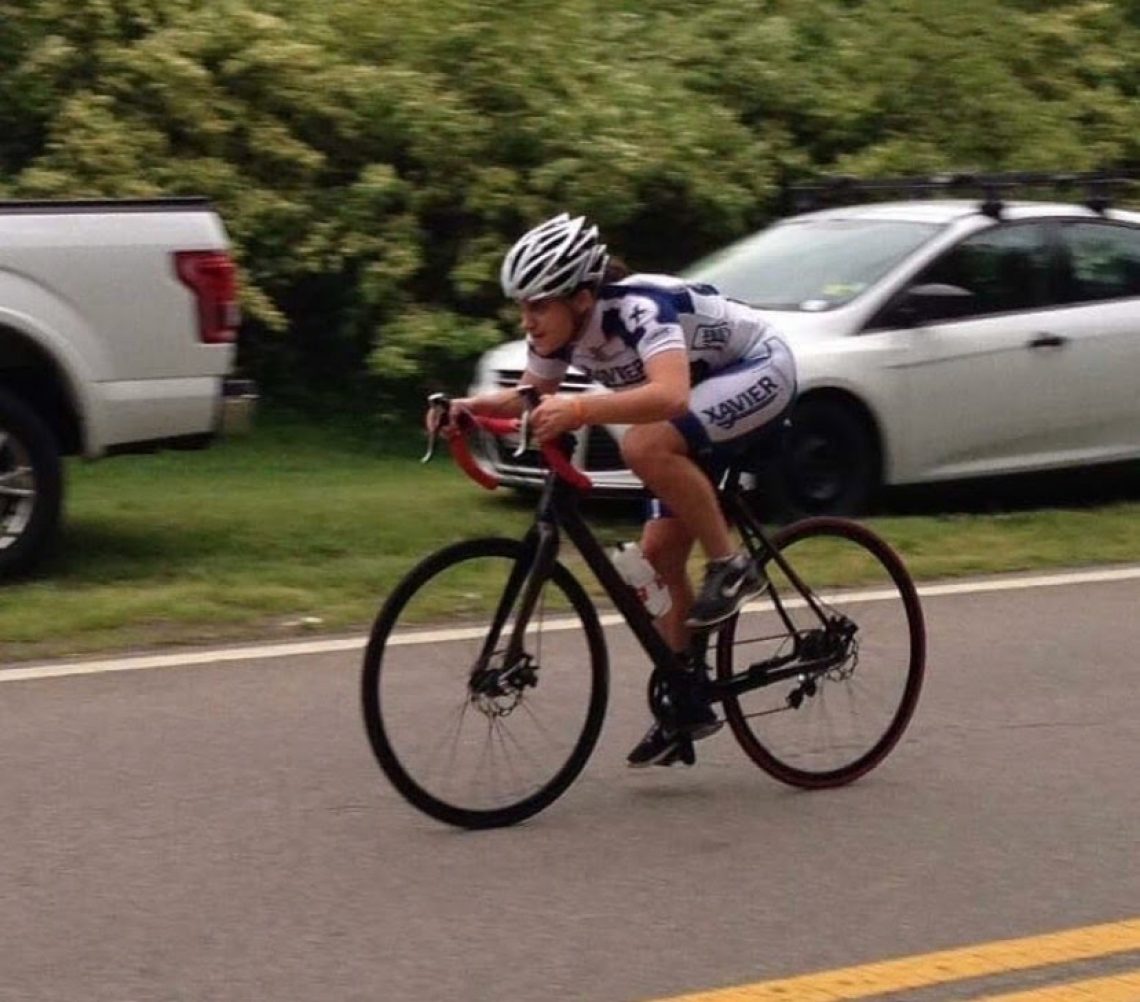 What Triathlons Taught Me about My Spiritual Life

My faith journey’s been pretty arduous. To sum it up briefly, I’ve faced frustrations and let downs. I’ve asked difficult questions about my identity and my relationship with God. I cannot help but remember the growing pains of the high school me who was struggling to find a reason to believe in God. I was cynical and arrogant. Little did I know, the challenges I would face throughout college would require even more grit, resiliency, and faith.

In college, I wanted to try a new sport. I joined Xavier’s club triathlon team thinking it sounded cool and would be a great way to stay in shape. I mean, how many people can say they’ve done a triathlon? Sign me up. A triathlon consists of three events: swimming, biking, and running. The training for a triathlon is different than a marathon because you’re focusing on three sports instead of just one. It requires cross training, which is combining two or more disciplines in a workout. For example, going for a bike ride and then running and/or swimming afterwards. Throughout college, plenty of obstacles came my way, but I had a constant in my life: triathlons. The team that I had joined became some of my closest friends, giving me a great outlet for stress, and a sense of accomplishment.

In September, I was looking forward to participating in the Deer Creek Fall Challenge in Mt. Sterling, Ohio. It’s an annual race the Xavier Triathlon team does, and I was grateful to participate alongside my former teammates. The internship had been hectic and fruitful, but I’d been neglecting my physical health. Taking care of your mind, body, and spirit is necessary. I had been nurturing my mind and spirit but had gotten lax with the “body” part. After talking with one of my housemates and receiving his encouragement, I started to incorporate exercise into my schedule again in preparation for this triathlon.

On race day, I drove up to Mt. Sterling at 5:30 am. I had a great feeling about the race. Three sports comprise a triathlon, but there’s one more element that’s crucial to the sport: the mind. If you are in a poor mental space and lacking grit, you might find yourself hating the entire thing. People might want to say “Triathletes must hate themselves” because quite honestly, a triathlon is an uncomfortable experience. I disagree, though, because what looks like punishment to one person looks like self-regulation to another. What appears to be pain is the acceptance of certain limits and a willingness to push into the discomfort so there is capacity for growth, endurance, and strength. As athletes, we are gentle with our bodies because we listen to them. It would be foolish not to—it could lead to dangerous consequences otherwise. I don’t think someone who “hates themselves” would listen to their bodies, be mindful of their breathing or heartrate, let alone do something that is uncomfortable.

The same goes for our spiritual lives. We need to exercise and push ourselves to pray, even if we don’t feel like it. We must be willing to step into the messy areas of our lives to find God there amidst everything that seems to be going wrong. Similarly, we need to practice endurance. We tend to focus on the destination, rather than the journey. God can be found in the present moment, which is something I’ve been realizing more and more. We must run our own races and remember it’s not a sprint. Even though we must do the walking ourselves, there are other people walking alongside us at their own pace. We can’t get discouraged when we see ourselves get passed by someone faster than us.

The morning of my triathlon, the thoughts in my head began to cease. I focused on my plan of action for each event and pictured clearly my success. In the swim, I would keep my head in the water and swim slowly so I could focus on my breathing. In the bike, I would focus on shifting gears and breathing. In the run, just finish. There is power in directive thoughts—short, purposeful mental actions that keep you from overthinking and “messing up” in the heat of the moment. When I arrived at the race site, I checked in and prepared my transition area materials. The transition area is the space between events. Since the transitions are also timed, it is important to be as efficient as possible when moving from the swimming area to the bike racks and later from the bike racks into the run. It’s essential to organize your designated space in the transition area. I put my helmet on the bike seat, my shoes next to the bike on top of a towel, and a milk crate to sit on and to throw my wet gear in. I place nutrition tablets and gel inside of my shoes, so I don’t forget them.

In our lives, we need to carve out time and space to pray, to read Scripture, and feed our inner selves. We need spiritual nutrition, which can be aids to us. For me, this looks like reading books, the Bible, attending bible studies and lectures, or having a conversation over coffee with a spiritual mentor. These are great things to do on my own, but these are just supplemental. We need the mass, the Sacraments, and community to get us through life. We can make little “transition areas” more accessible by dedicating a small corner of our lives to these practices.

When I started the swim, I had been anxious watching everyone start. It felt like ages before it was my turn to go. The swim is my worst event, especially in open water. Yes, it was in a lake. Yes, there were boats and huge waves. To add to the discomfort, the faster and more intense swimmers are released last and it feels like sharks chasing after you. It’s even worse when these swimmers kick you in the ribs and leave you gasping for air, especially when you are already struggling. Of course, it isn’t intentional. They’re so focused on their own success that they forget that others might not be in the same place as they are. At some point in our lives, we do our first triathlon. It can be hard to remember that first painful experience, but it still happened.

This year, I did my best open water swim ever. I didn’t panic, and I only stopped once during the 750 meters. I focused on my breathing and finished in twenty-five minutes on the dot. Even though I swallowed a lot of water and felt like Peter did when he walked on the water and began to sink, I still finished. I had been focused on my own progress and was able to achieve a personal success. It can be easy to overlook your accomplishments because it wasn’t good enough or fast enough. I was just proud that I had the confidence during the swim and was consistent. I didn’t pay as much attention to the people passing me or behind me. I was fully in the moment. The same experience happened in the biking portion, except this time I entered the Zone. Many runners experience this—a magical feeling of your body being almost on auto pilot. It’s a euphoric feeling. On the bike, I appreciated the scenic ride through the countryside. Once again, I focused on the rhythmic movement of my feet pedaling and my breathing, shifting gears when it was appropriate. Having the first two legs go so successfully made the run mercifully uneventful. My legs felt like jelly when I began but I powered through to finish confidently and my signature move known as sprinting to the finish line.

It’s interesting to compare life to triathlon. It is very relevant to making sure that we practice and cross train all three parts of ourselves: our minds, bodies, and spirits. If we neglect one and only practice the two sports, then we will not be as successful in the former. It is important to not look at someone and think “I wish I could be that fast” only to feel bad about your ability. We each have our own strengths, abilities, and talents that we must practice. We need to be doing our best with what we are given and where we are in our lives, not compare our lives with others- be glad for them, pray for them, encourage them… but do not wish for their life because you do not know what their stories are that led up to this point. That is why me must build resiliency and grit to persevere through life’s challenges. We must lean into our teammates, our friends, and even our adversaries who might be running the race besides us. Once we realize it isn’t always about winning, we can stop and help others who might have fallen down, who might be doing their first triathlon and reassure them, who might just need someone to run with them, and stop for a water cup to chat with a stranger.