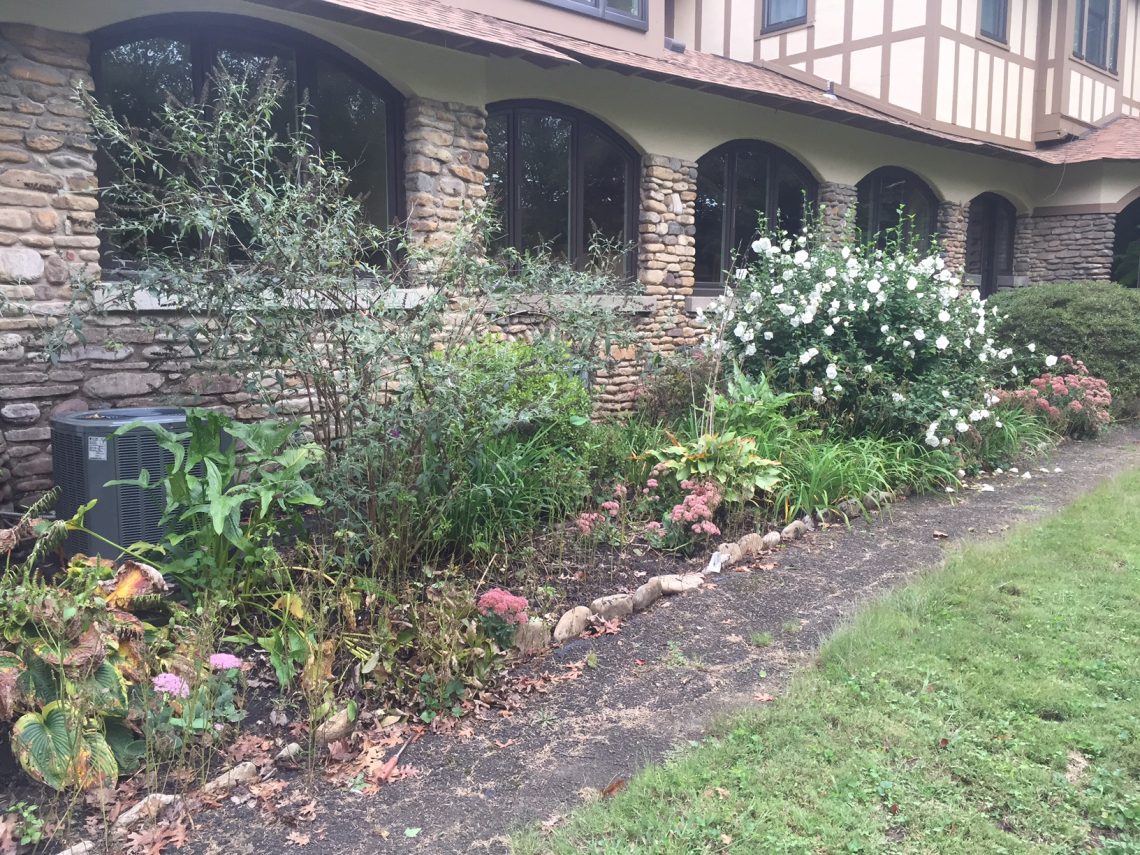 In Which I Work on a Garden No One Sees

I live with the rest of the interns in an old mansion on the Spiritual Center campus known tersely as the Rock House. It was the original structure built on the land here by Dr. William Irwin and his wife Mary Louise Orr before the Society of Jesus bought and reopened the space as a retreat center.  For decades, the house was a Jesuit residency, forcing institutional additions to the interior like fire-doors and dorm-style living quarters. Before the four of us moved in, significant renovations had to be made to the building to make it more habitable after years of being largely vacant. Central air, new windows, fresh paint, and refinished flooring were all added to the house this past summer.

The work that’s been done on the Rock House has been remarkable, but I haven’t been able to help with any of it since it all happened before I moved here. The house has in many ways been the symbol of the youth ministry team’s reinvigorated intern program, and as such there have been more than a few days when I’ve had to make sure my room was in order so a tour group could take a look through that afternoon. It’s a beautiful place to live, and as such receives quite a bit of attention from visitors.

With all the scrutiny the house has been under, I’ve still managed to find a spot that has largely fallen under the radar. On the east end of the house, lining the windows of our kitchen, is a medium-sized garden. When I was first shown around the house, no one mentioned this patch to me, and I understand why. It faces towards the neighboring retirement community where there are no walking paths that would put you in its vantage. No visitor would have any reason to see this garden.

And from the view from the kitchen, there’s not much worth seeing in that patch. Half of the greenery seems to be overgrown oxalis and crabgrass. A groundhog burrow hides itself in a back corner. The patch has seen better days.

That said, I’m a gardener. I’ve been acquainted with a trowel and dandelion weeder since my early teenage years when my parents decided that having a pair of twin sons could save themselves from the tedium of yard work. My brother took up the lawnmower—I took up the weed bucket. Even though I’ve been sure I’m the only person on the JSC staff who feels especially concerned with that garden, seeing common purslane where an Easter lily could be growing eats at the back of my mind until I have to take care of it.  Suffice it to say, I’ve started taking care of it.

I’ve only spent a couple hours on the patch since I moved into the Rock House, but it’s still had a profound effect on my relationship with the grounds here. The first thing I noticed was how many pollinating insects hovered around that patch. While from the inside of the house I was distracted by all the weeds, outside I could only notice how drawn bumblebees and butterflies were to our hibiscus and stonecrop bushes. They love them. My first weeding session was the first time I had ever seen a monarch caterpillar in the wild. A hummingbird flew by faster than I could get a picture of it. That ignored garden has been a sanctuary for endangered species this entire time.

Right now, there are a lot fewer weeds in that garden than there were a few weeks ago, but it’s still in need of work. Weeds will come back and promptly be pulled up if I spot them. As autumn approaches. I want to find some bulbs to plant so by spring tulips or hyacinths can make the view from the kitchen a little more striking. But even without that extra effort, God is still present in that garden. Its flowers are life-giving in ways different from the rest of the grounds but exist as part of a greater whole. Though it’s not an official part of my ministry, the garden does for the wildlife what I seek to do with retreatants.