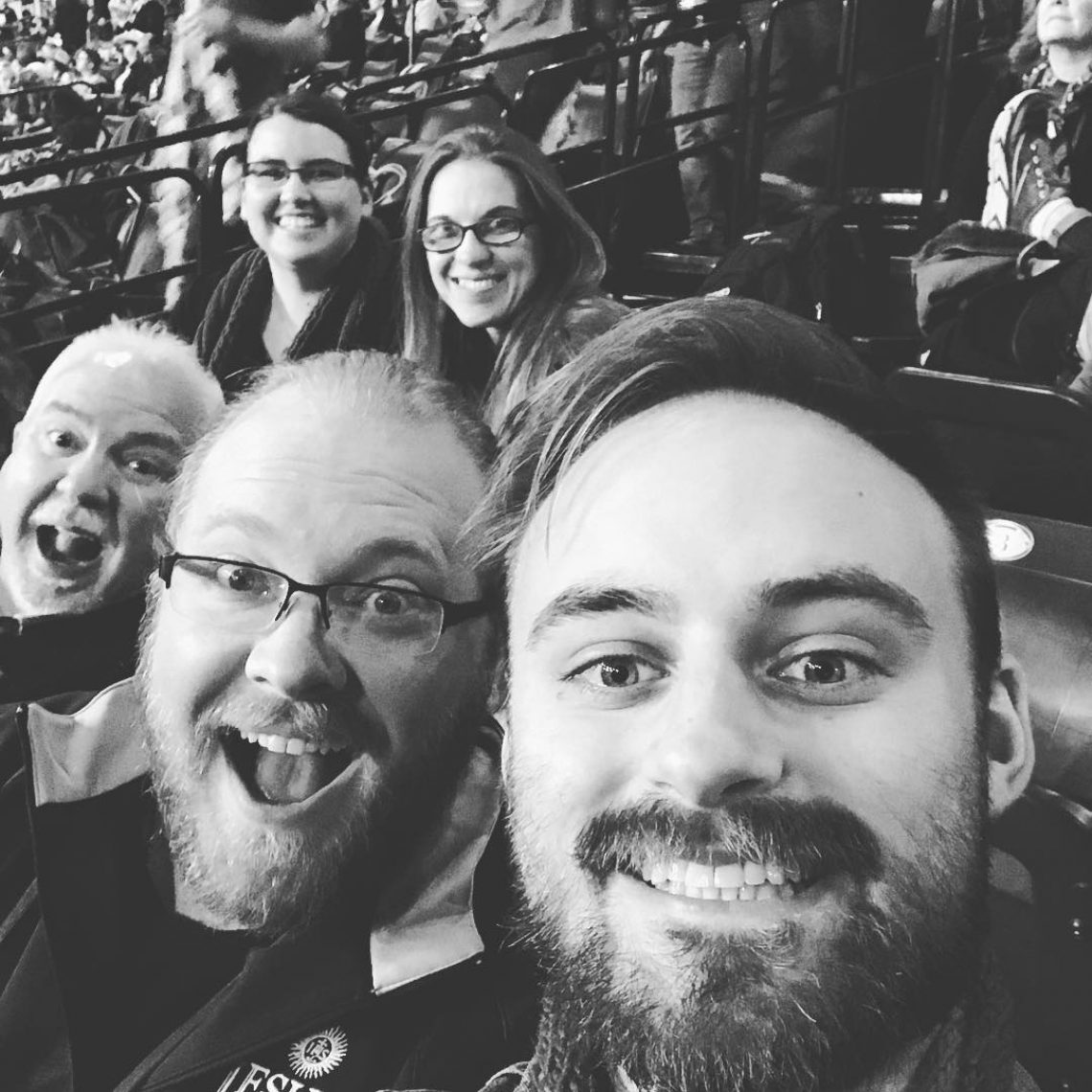 A happy Thanksgiving to everyone reading this! As I write this post, the Youth Ministry staff has just completed our busiest two-week stretch of the fall semester. Over the last fortnight we have led five different retreats for five different schools. Three of those required students to stay at JSC overnight.  When students stay overnight, then we as youth ministers have to be with them for 14 hours straight.

I prepared myself for this onslaught of busy days and late evenings by reminding myself of the dark-meat-and-mashed-potatoes-infused finish line that is Thanksgiving week. Of course, there was one obstacle between the end of those two weeks and Turkey day: The National Catholic Youth Conference in Indianapolis.

The other interns and I have been hearing about NCYC since our first week here. I had never gone, but almost every story I’d heard about it was positive. However, no number of positive stories will stop me from having reservations toward essentially every part of the conference. There were 25,000 people scheduled to attend, and my introvert-identifying self was expected to talk to all of them. Eucharistic adoration was widely available and heavily promoted; I have never been able to understand or enjoy adoration as a form of prayer. It’s just too inactive. The icing on the cake was the Christian rock concert held the first night we were to be there. I shouldn’t have to explain how I don’t like Christian rock.

Ok, I’ll explain how I don’t like Christian rock.

I like hardcore punk. I like hip hop. I like R&B. I went to a Father John Misty concert before he got annoying. I’ve taken pride in having a taste in music I can talk about confidently at parties. Christian rock did not belong with the music I listen to. In fact, I have described Christian rock in the past as “Mediocre singer/songwriter music with ‘Jesus’ inserted into the lyrics to distract from how mediocre it is.” I don’t like Christian rock.

So taking a year to train in youth ministry was going to force me to come to terms with this disdain. Our team travels across the region playing Christian rock songs for high schools on a regular basis. I’ve had to learn bass guitar because of Christian rock.

But I was still a firm “no” towards the music. I did this job to work with young Catholics, not play praise and worship songs. I’ve expressed these feelings aloud and my teammate Eric swore he felt the same way until having a moment of conversion. Whatever made Eric change his mind on Christian rock wasn’t going to happen to me, though. I’d built a big stone wall around my music taste, and it wasn’t going to change.

Which obviously means that I had a huge conversion moment. Or at least a gradual one.

I was taking a midday break from a retreat a few weeks ago when I got the urge to listen to Matt Maher’s “Your Grace is Enough” unironically. I did and kind of liked it. Needless to say, I was horrified by this. The song is big, catchy, and completely lacking in the subtlety I will tell you is necessary for good songwriting. But, hey, if I like at least one song, it’ll make it all the much easier to get through the concert he was going to have at NCYC.

So last Friday night, we arrived at NCYC after having just finished a junior retreat for St. Xavier that afternoon. I was tired, had just spent three hours in a car despite my propensity for motion sickness, and barely had enough time to catch a quick dinner before the team got in line for the Matt Maher concert at Lucas Oil Stadium. I sent Snapchats to my friends that mostly said “About to go to a Christian rock concert. Wish me luck.”

And wow did I feel like a jackass once I got inside. All around me were those 25,000 people, most of them young, engaged and excited to be sharing in their faith together. Matt Maher comes out to “Your Grace is Enough” and everyone’s singing along. It’s like church but bigger. (Maher also tried entering the stage by jumping off the drum platform and fell on his face. There’s video of it on his Instagram. It was awesome.)

I was filled with a feeling of “Oh, I get it now.” I was there having fun, but also being vulnerable and emotional with thousands of others. It was true communion. And when Maher’s set was finished, they converted the stage for Eucharistic adoration, so I got to deal with that apprehension as well. I quickly discovered that adoration works as a prayer when you understand the beauty of existing together with the people around you instead of being concerned about whether your kneeling posture is correct. It was beautiful, and I finally understood why.

I spent the better part of the next day passing out temporary tattoos of Pope Francis to teens and talking to them about the JSC’s ministry. Interestingly enough, beginning a conversation with “Pope Francis tattoo?” is a great way to break the ice with strangers. We were unified in faith, and the tattoo made that apparent.

At a certain point that afternoon, I felt the urge to go to confession. When I sat down for the sacrament, I found myself confessing to a Fr. Rodger that I often walled myself off from others when I felt their expression of faith didn’t mesh with mine. There was no pattern to where I built my walls. Some people’s faith I felt was too folksy, others I found excessively devout. I doubt I would have admitted this the day before. Instead, I was confessing the sin of my closed heart to a strange priest from Chicago who forgave me and asked that I pray a sincere “Our Father” before the Blesses Sacrament. I did and ended up praying in adoration for the better part of an hour as I did an Examen, looking over my past day and taking note of everything for which I was grateful.

So, in the spirit of the Examen and with Thanksgiving in a few days, I would like to give thanks to God for all the blessings in my life. Thank God for my team members Steve, Eric, Matthew, Shannon, José, and Megan. Thank you for the entire staff at the Jesuit Spiritual Center. Thank you for all the schools and students we have ministered to these last three months. Thank you for all the parishes I’ve called home: Bellarmine Chapel, St. Mary’s in Oxford, and St. Andrew’s in Milford. Thank you for my family and the young Catholics I’ve been blessed to sponsor in Confirmation. Thank you for the event organizers at NCYC, and thank you Matt Maher for converting me on Christian rock.

Enjoy the turkey everyone.